Apart from the market scene (see story here), we also had some time to explore the city’s restaurant scene during our short stay. There’s quite a lot of choices, perfect for breaks in between sightseeing.

We arrived in time for breakfast and since our hotel was near the famous Good Taste restaurant, we went there for a quick bite.

It’s a large cafeteria-type space always filled with hungry locals and tourists. It’s not hard to see why. They have a menu filled with many affordable home-style dishes. 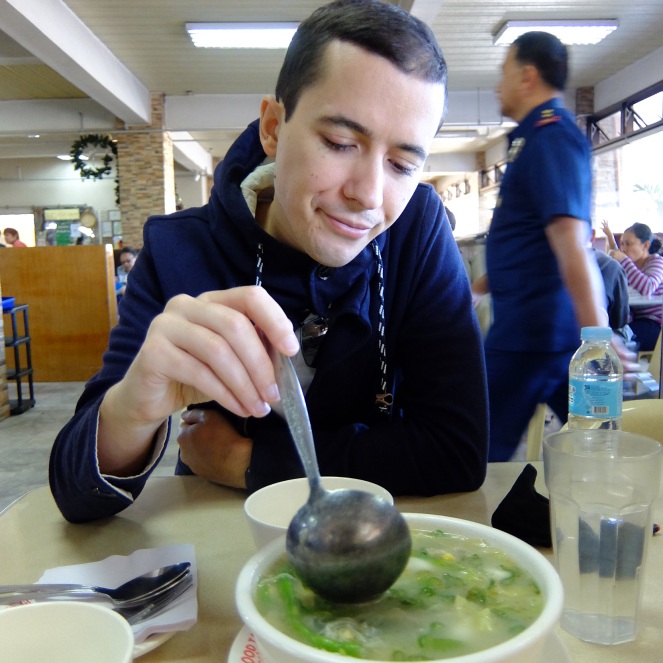 Because we had just come from a four-hour bus ride and were greeted by the cool Baguio breeze we chose to have the chicken misua with quail eggs and veggies. I love soup, so this was the perfect way to start your day. For PhP 170 we had a huge bowl good for three people.

For our late lunch we wanted to go somewhere that had a nice view. We chose Arca’s yard. It’s a house by the side of the road that has been converted into a restaurant, giving it a comfy and homey feel. 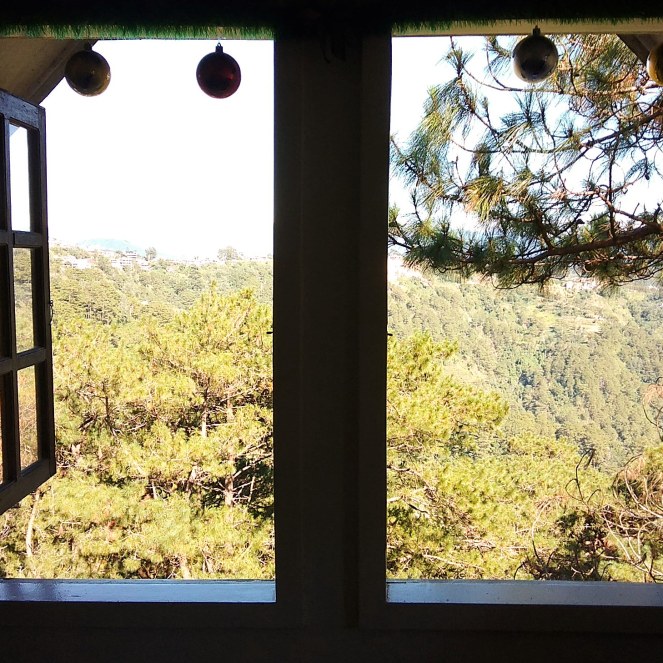 They have a little terrace where you can enjoy your meal and the view from the property. But since we felt it would be too cold we went upstairs and picked a spot by the window. They also have little spaces where you can sit on mats and pillows, and have your meal on low tables Japanese-style. There’s a good amount of choices on the menu contrary to what I’ve read on some reviews. 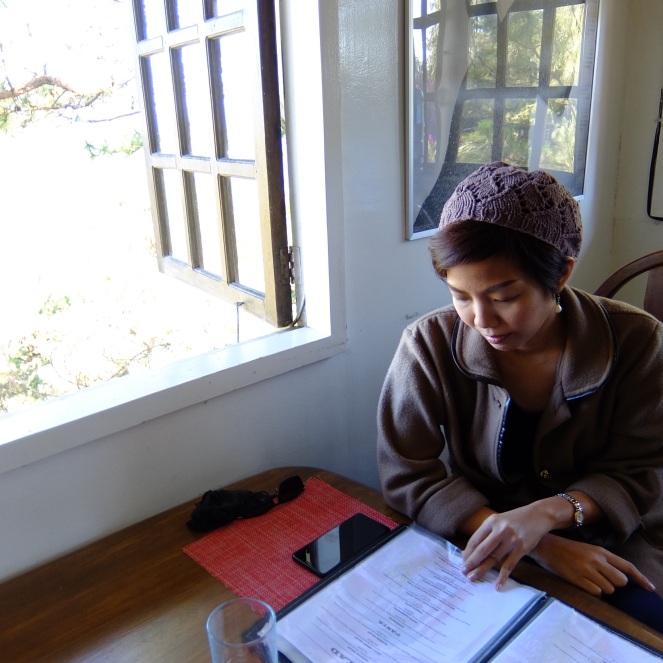 I chose the pesto carbonara and I was quite satisfied with my order. The pesto tasted fresh and the addition of cream made it extra rich. 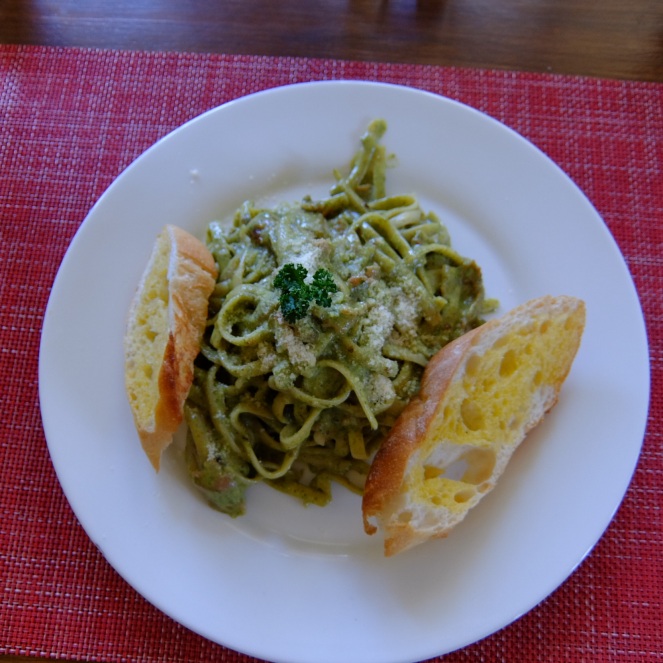 Arnaud had the Hungarian sausage, bacon, and egg with rice. They could have added more vegetables and bacon but in spite that, the meal was still good. 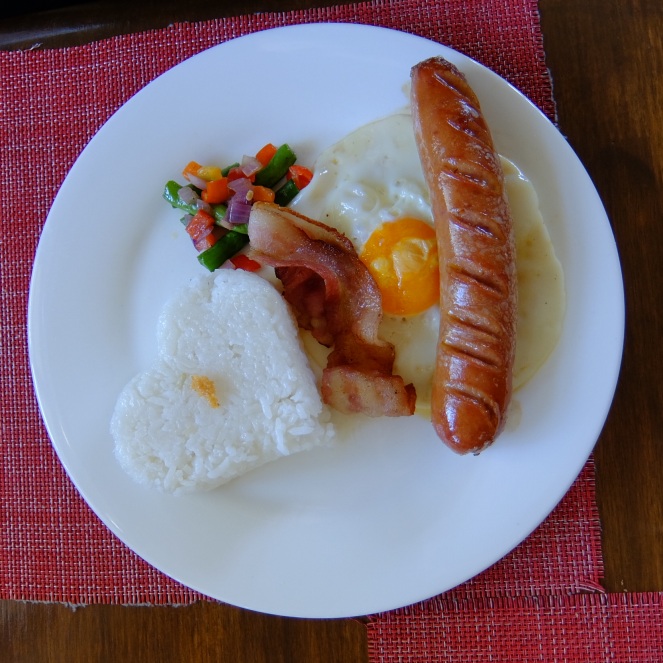 We decided to treat ourselves to some dessert and hot drinks. I had my eye on the sweet potato pie ala mode so I ordered that together with a cup of hot chocolate and a cup of Benguet coffee. 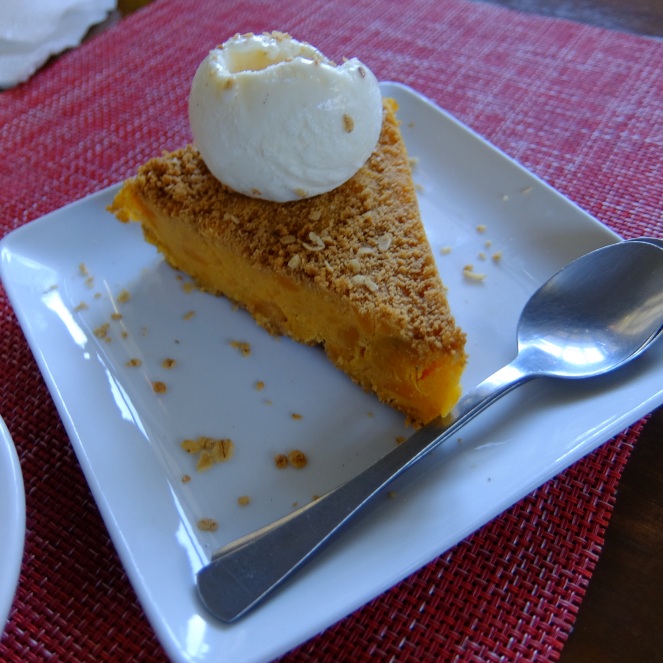 For people like me who don’t like sickly sweet desserts, this was a great discovery. I was told that the sweetness comes only from the sweet potatoes and that they don’t add any sugar. The vanilla ice cream added a touch of sweetness and extra flavor.

Imagine mashed sweet potatoes sandwiched between thin, light oat crust layers. It was more crumble than a crust. I couldn’t figure out what was in it. Booo. We enjoyed it more than expected and our hot drinks went well with it. 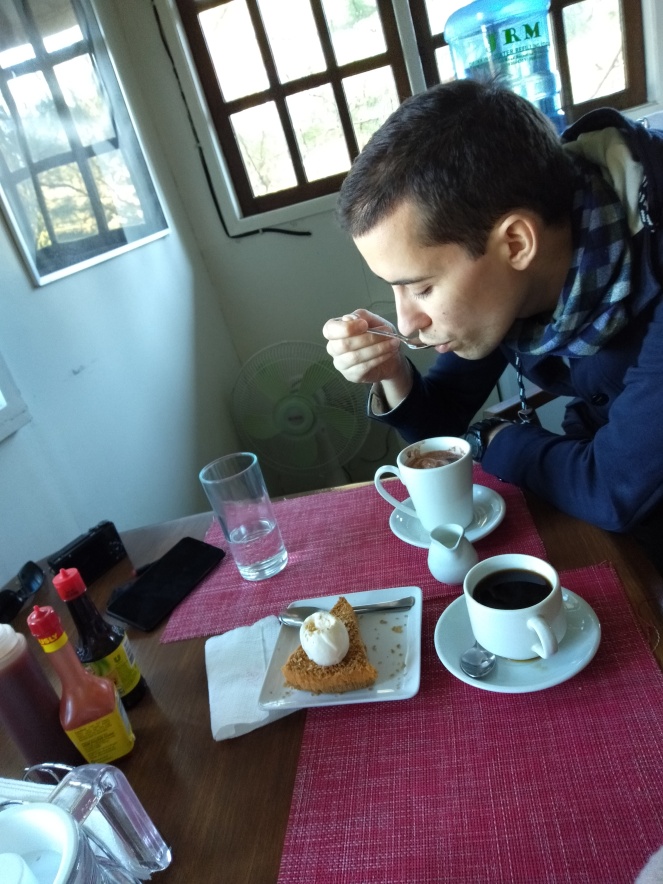 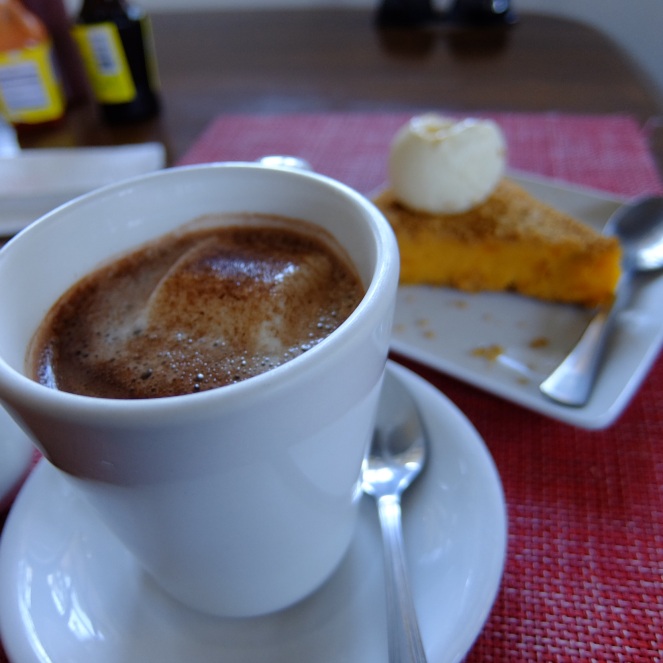 For dinner we went to Cafe By The Ruins, another Baguio classic.

Arnaud had a steak sandwich with sweet potato chips and squash soup. What was special about this was the bread, which was made with sweet potato. It had a hint of sweetness which provided a contrast to the savory meat. 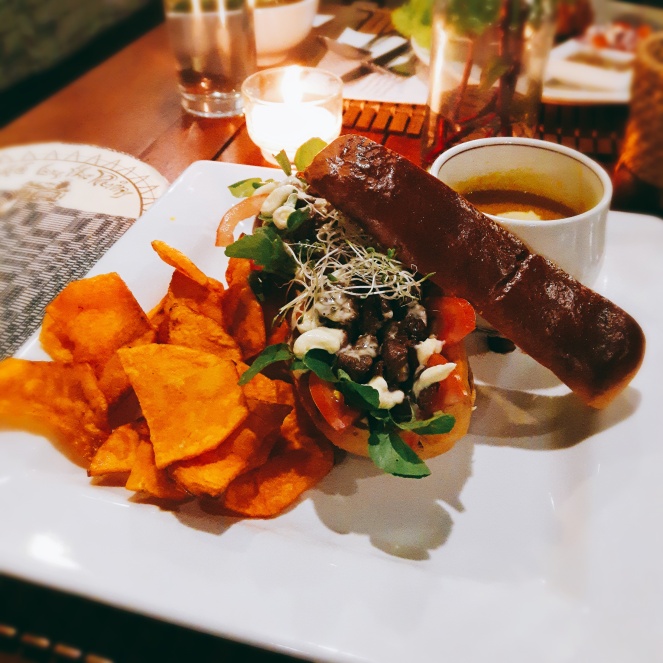 I ordered a bagnet meal that came with some forbidden rice and a cup of sinigang soup. The dipping sauce for the meat was bagoong (fish sauce) with some lemon juice instead of the usual vinegar. 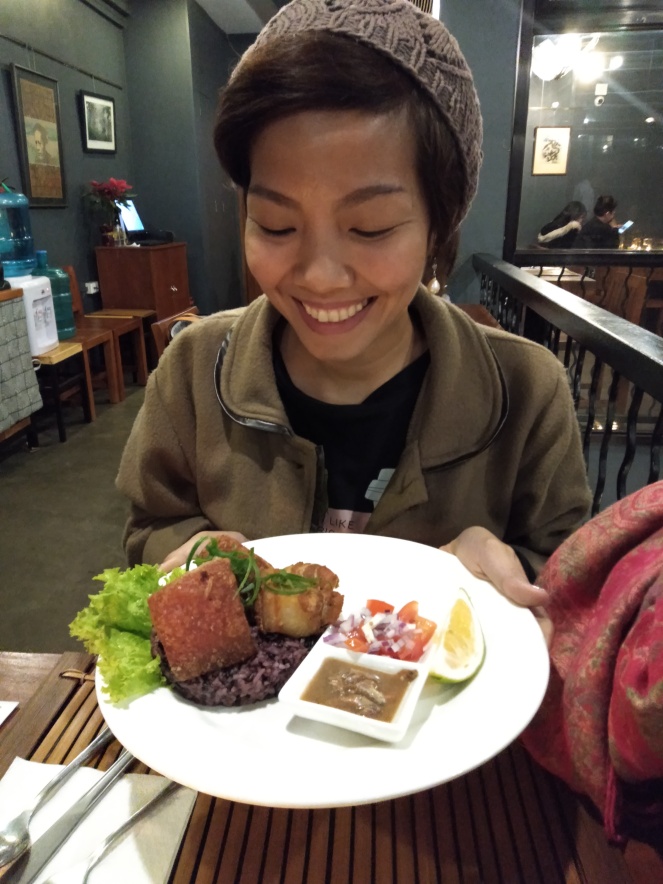 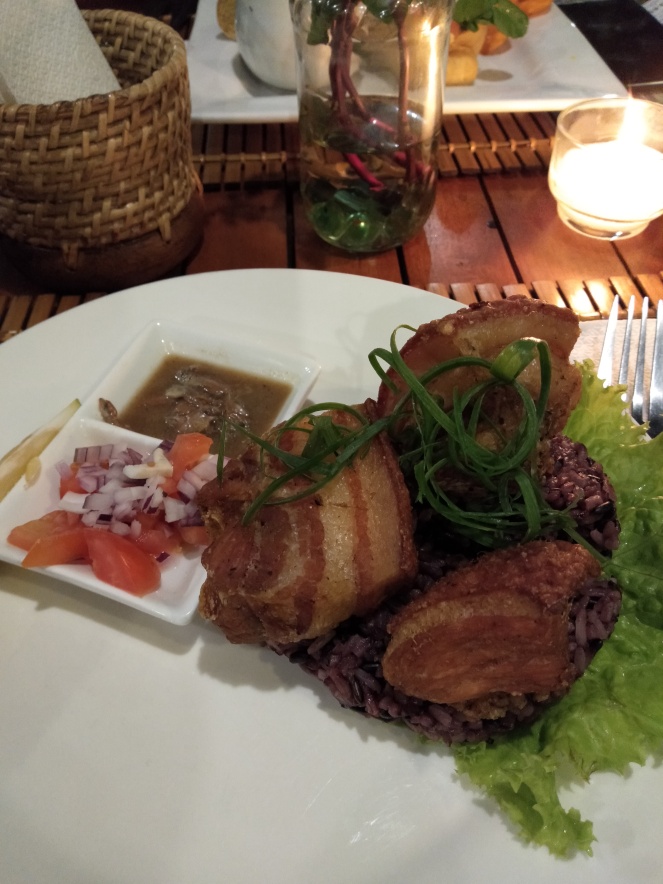 I was disappointed because the bagnet skin wasn’t crunchy like it’s supposed to be. For the price it wasn’t value for money; it was mostly chunks of fat. I love fat sometimes but together with a good amount of meat. The sinigang soup was overly sour.

Anyway, we decided to have some hot chocolate with carabao milk to end the night. Arnaud was just discovering how good native tsokolate is, thus the choice. 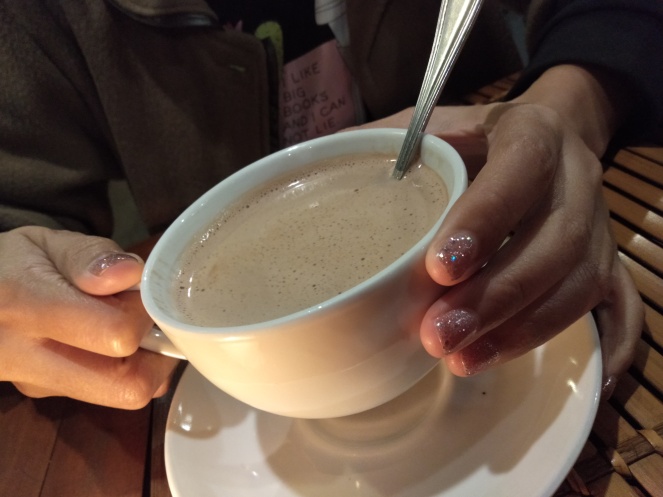 This was a winner. The rich chocolate drink took the place of dessert for us and sort of appeased disappointed me (no thanks to you, Bagnet meal).

The next day we decided to have a good breakfast before attending my friend’s wedding. We had the buffet at Venus Parkview hotel’s Olive Cafe. For less than Php 300 you can have waffles, omelettes, bread, Filipino breakfast staples like fried rice and dried fish, pansit, ham, salad, fruits, dessert, and coffee. 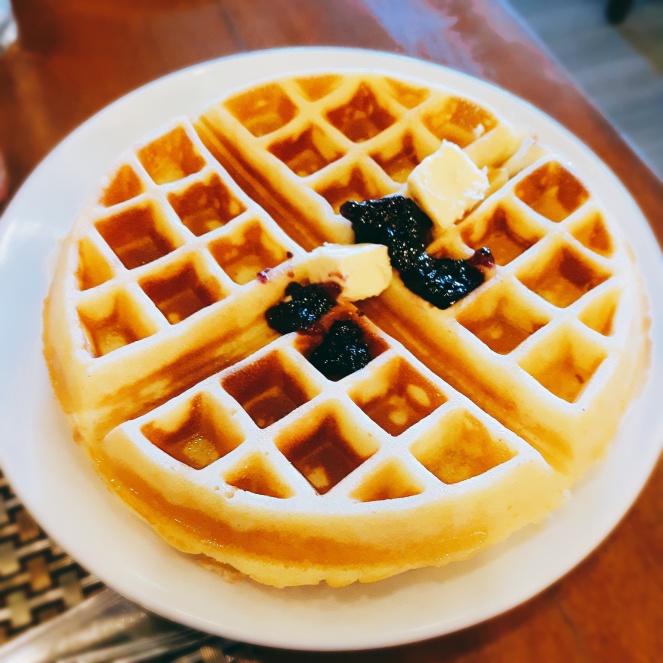 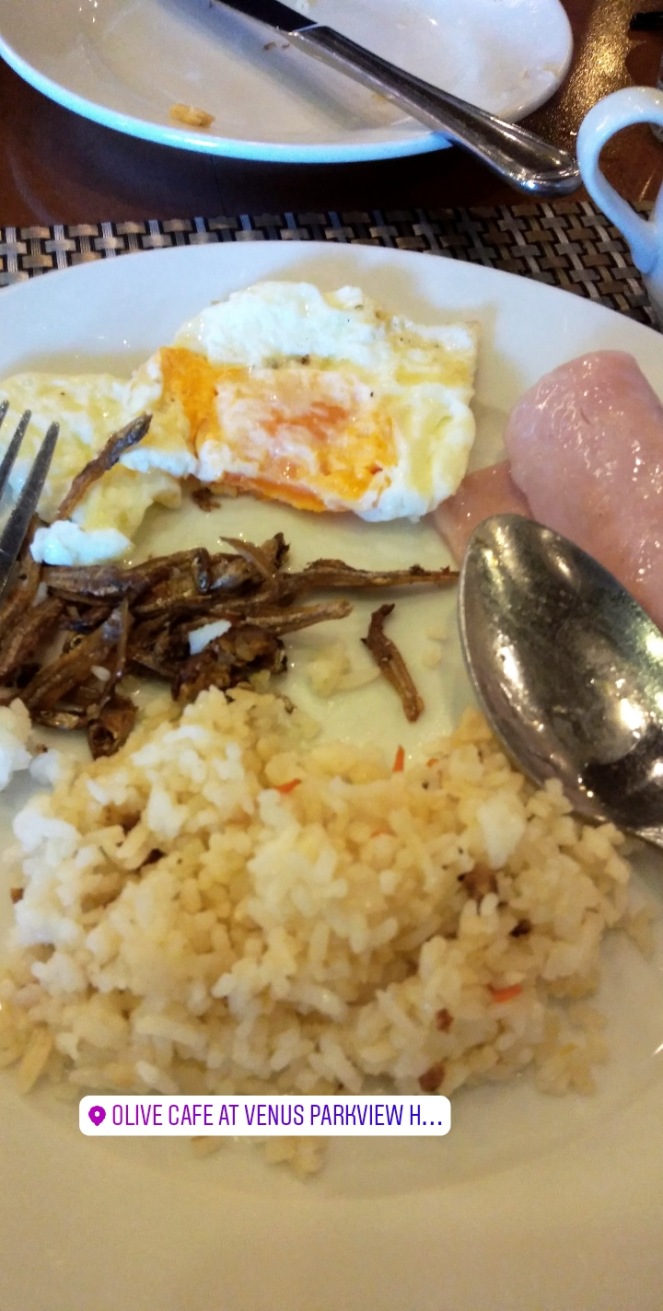 The wedding was at The Forest Lodge at Camp John Hay and the buffet had a good selection of dishes. I had some salad, Angus beef, and cajun salmon, among other things. 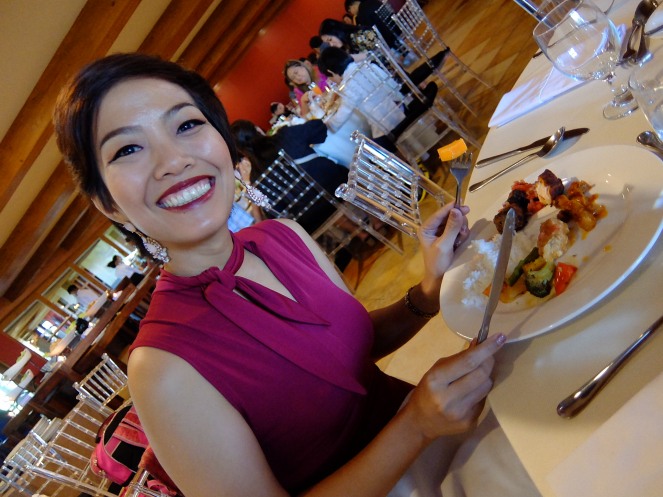 The view is not bad either. Nearby you could go for a stroll amongst the pine trees. 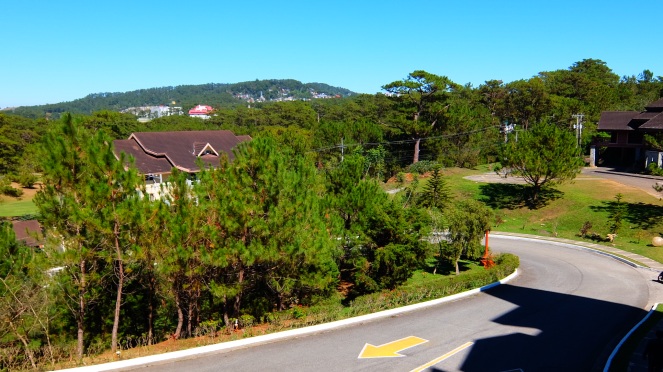 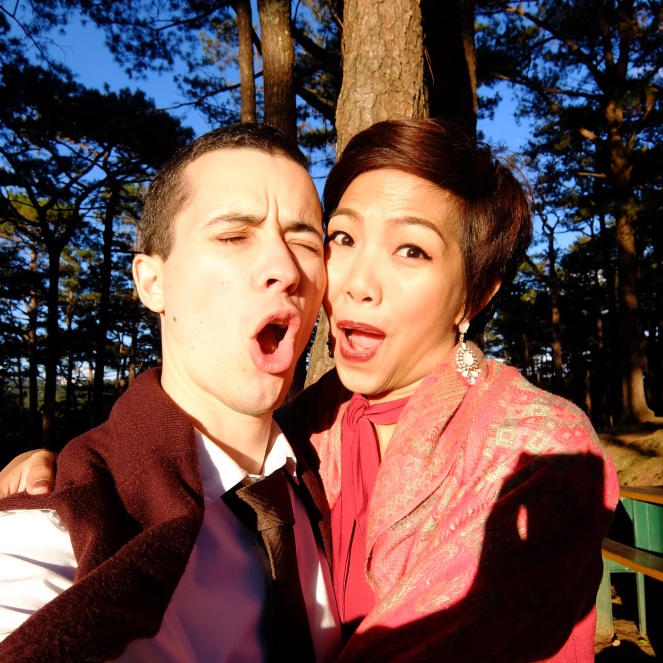 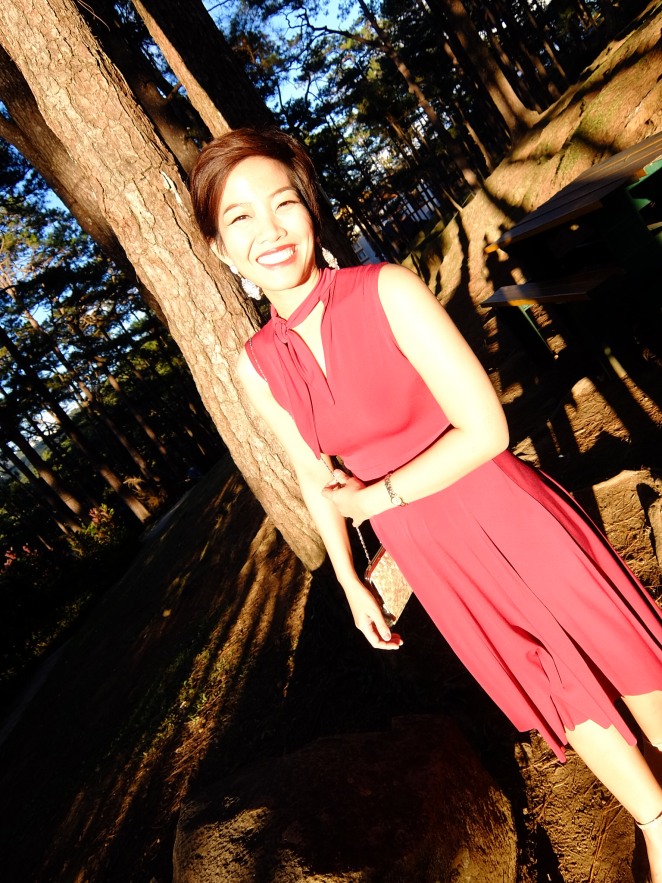 Last stop before getting on the bus to Manila was Tsokolateria. Arnaud was on a chocolate roll so we decided to go and wait out our last few hours there. 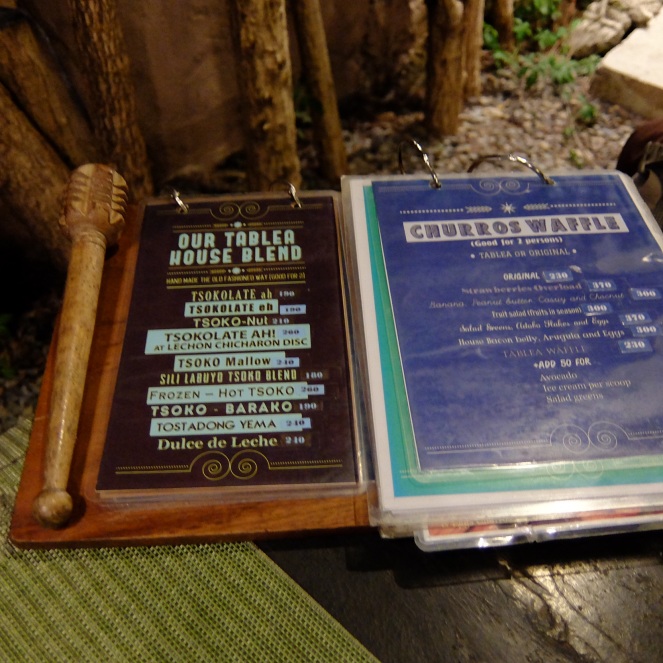 The churro waffle intrigued us so we ordered the one with BLT toppings. It also had some mango slices and an egg, plus pancake syrup and chocolate syrup on the side. 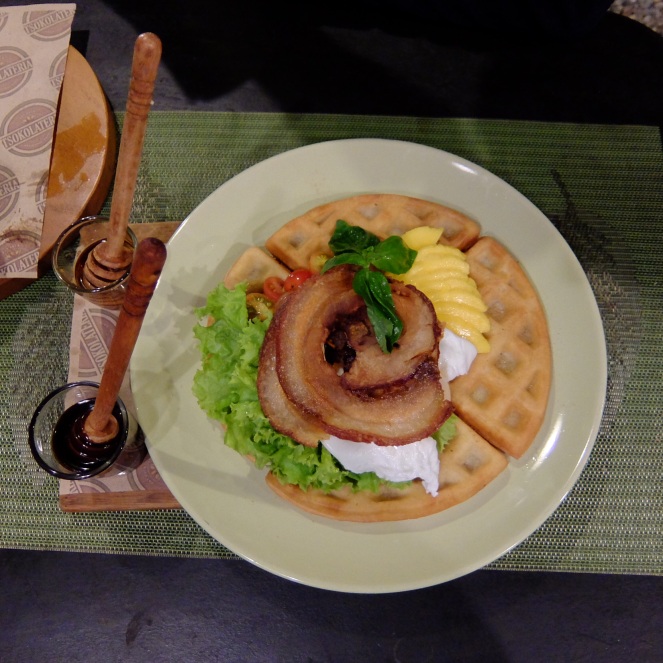 As the name suggests it was a crispy churro in the shape of a waffle. The bacon wasn’t really bacon but a thin liempo slice. Overall, it was a good meal.

But the real highlight was the tsokolate batirol. It was thick and creamy and packed with bitter chocolate goodness. 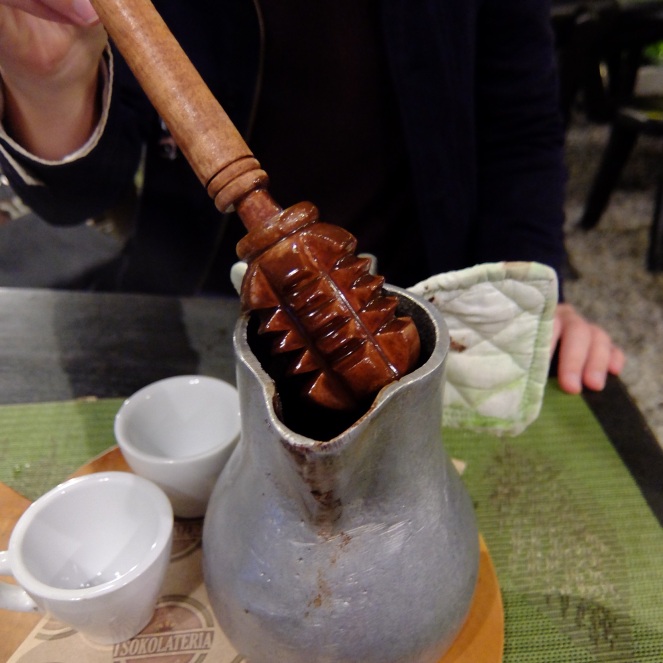 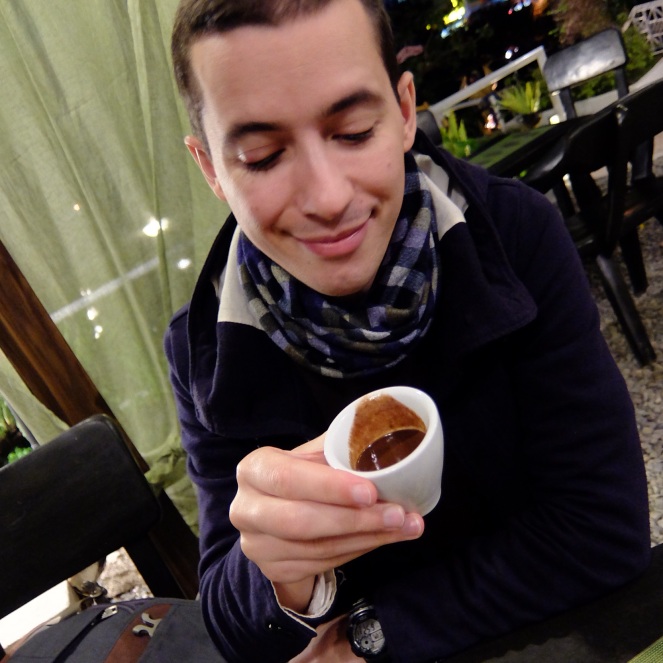 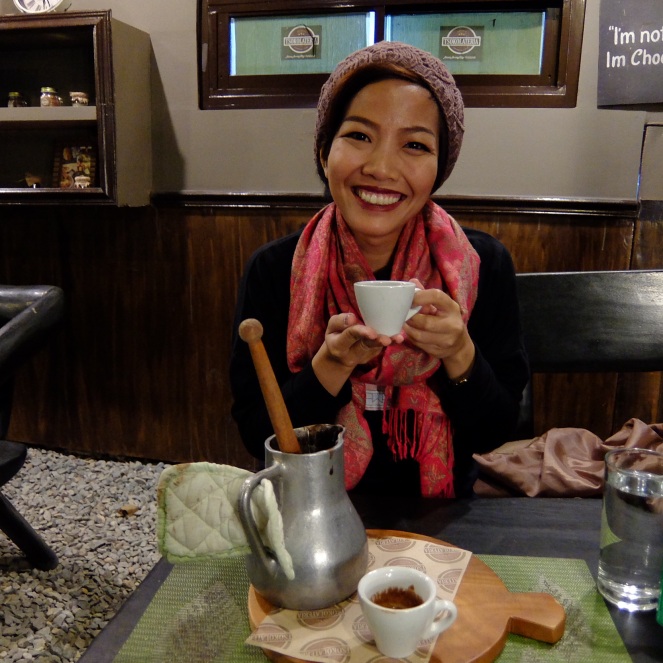 There you have it, our two-day Baguio food adventure. There’s a lot that needs to be explored so we’ll definitely go back for more!